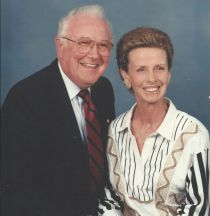 If you don’t know Max or Doris Hunt, their biographies are below.  Please scroll down and see why they exemplify Volunteerism.

Shannon Callarman created a video about the memorial sculpture project when it was introduced. She said, “It’s such a pleasure listening to different perspectives on reflections. In the video below, sculptor Guy J. Bellaver, Al Patten, and David Hunt emphasize the importance of the Max and Doris Hunt project and what it means to them personally.”

Work:
Mr. Hunt spent most of his work life in the textile industry, principally in sales.  In 1982 he became Owner and President of Northfield Block Company (concrete manufacturing), continuing to serve as Chairman of the Board until his death.  The Chicago Tribune published an article about him in 1993 – Max Hunt: A Gift To St. Charles Who Keeps On Giving.

Fundraising/Donating:
Mr. Hunt donated materials from his masonry company, Northfield Block, to rebuild Holy Angels Church and School on the South Side of Chicago after it was leveled by fire in 1986, and also to build Delnor-Community Hospital in Geneva.
Hunt was noted and honored for his efforts in passing a critical Elgin Community College referendum.
He was a major organizer of the St. Charles Youth Center at the Baker Community Center, replacing a swimming pool with bowling lanes and then removing those for the open space of a gathering hall.
Along with his wife, Mr. Hunt was instrumental in organizing and raising the funds required to build the entire Norris Campus, which includes the building now called St. Charles East High School, the Dellora A. Norris Cultural Arts Center and Lester J. Norris Sports Complex.
Mr. Hunt was the Chairman of the fundraising committee responsible for commissioning and siting Ēkwabet, the Pottawatomi Indian sculpture along the Fox River.

Honors:
William D. Barth Award for Human Services and recognition for community service – Tri-City Family Services [in receiving this honor Hunt was singled out as an inspiration to everyone around her and the “quiet motivator” behind many community projects and organizations.]

One thought on “About Max and Doris Hunt”